One in four women is a victim of heinous crimes such as rape, molestation, domestic abuse and acid attacks. Most women are unable to voice it out and thus continue to face these issues on a regular basis.

In the most recent times, many individuals, organisations and corporate entities have been actively working to create a social impact while projecting the issues women face in the society. Among these, one woman named Srishti Bakshi stands out with her unique initiative. She decided to bring social awareness and empower women by initiating a movement named “CrossBow Miles”. It is a movement that Hamstech Institute of Creative Education supports and enthusiastically stands with its cause and activism. 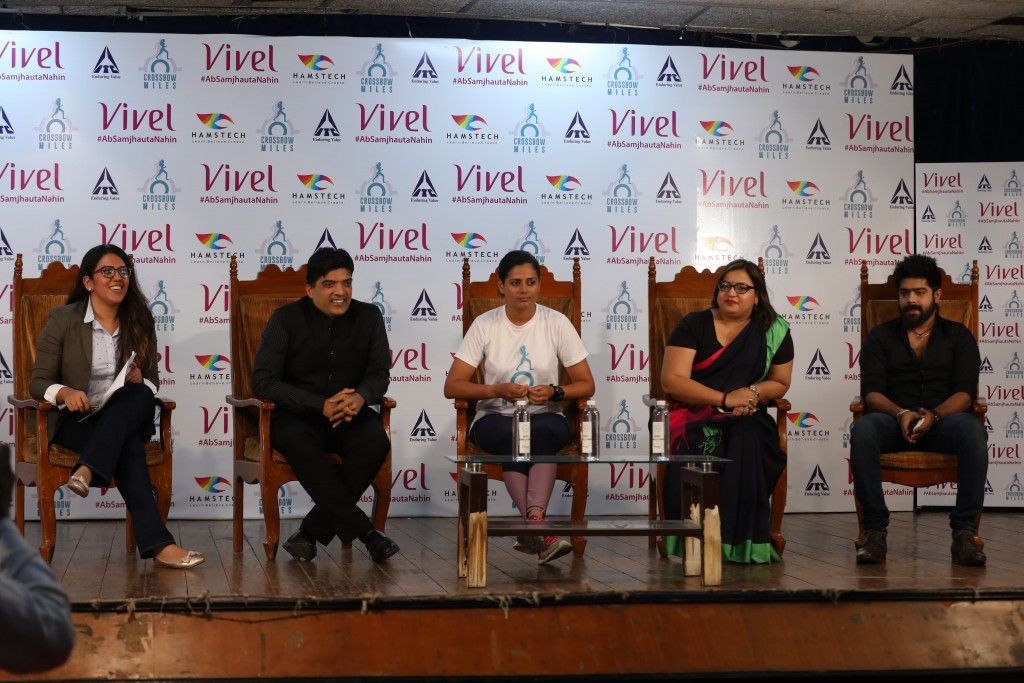 On December 01, 2017, Srishti Bakshi reached Hyderabad as part of her iconic walk for the women’s cause, and was welcomed by Hamstech. In an attempt to create social awareness and to empower women, a workshop was conducted by CrossBow exclusively for Hamstech students. The workshop, titled “Know Your Rights” was organized on the same day at the JNAFAU Auditorium, Hyderabad. Among the panellists were Srishti Bakshi (Founder, CrossBow Miles), Talish Ray (Senior Advocate), Revanth (Singer) and Deepak Ramola (Founder of Project FUEL).

The workshop began with questions asked by the audience to the panellists on topics like provisions of law for women and women’s safety among many. The audience were a mix of students from all the four departments – Fashion design, Interior design, Jewellery design and Photography. During the workshop, Srishti Bakshi and Deepak Ramola conducted a couple of activities aimed to build inner strength and encourage women to speak out for themselves.

Powerful poses for self-defence, clapping together on random counts and viewing testimonial videos of women from around India were few exercises shared with the participants. Towards the end of the workshop, the audience interacted with one another and shared personal experiences of angst and success. This interaction helped many women come out of their shell and speak of incidents they faced. Srishti Bakshi spoke about the CrossBow Miles movement and the reason behind starting it. She expressed her concern for the rampant gender bias and wanted every woman to be able to stand up for herself. She also explained how her walk would cover a journey of 3800 kilometres starting from Kanyakumari to Kashmir spreading the message of gender equality and women empowerment. The CrossBow team introduced the “CrossBow Miles app”. The app would calculate the number of steps taken and allows you to unlock resources for causes you care about depending on the count of steps. Every cause you walk for benefits an underprivileged girl child.

This workshop was an ice-breaker as many women got the confidence to share their experiences. It also brought a feeling of togetherness and support for one another. Hamstech students feel privileged to have been part of such a workshop from where they have gained the inspiration to bring a positive change in the society in every way possible.