HISTORY AND TYPES OF JEWELLERY DESIGNS

HISTORY AND TYPES OF JEWELLERY DESIGNS

As we all know, India is the biggest repository of privately held gold in the world. Since ancient times, the use of gold in jewellery is widely known. Even the poorest of the Indian family owns a gold piece. In short, we can say that Indian jewellery is as old as the Indian civilisation itself. The ruins of the Indus Valley civilization, going back to 5000 years, shows us the existence of beaded jewellery. Greek visitors have beautifully described India’s gold jewellery in their texts. So, we can say that the jewellery which we Indians own is famous worldwide.

The vast variety in Jewellery Designs and the finishing makes it more valuable in the international market. People from all over the world come to India to buy these inexplicable beauties.

India was already rich and was flourishing in the international markets, but the advent of the Mughals took India to an extreme new level. The synthesis of Rajput and Mughal style was something that cannot be explained, which resulted in a great outburst of ornamentation, elegant, exquisite and of a lush extravagance never seen before. Although the traces can be seen in ancient Taxila, the style took its zenith after the advent of the Mughals.

But as time passed, in the modern world, gold jewellery started to be taken as an asset, which is kept in bank deposits.

As time changes, we can see the change in the Jewellery Designs too. Also in India, we can see that different regions or states have different designs. Many tribal designs are vulnerable and are on the verge of extinction. They are needed to be preserved or else we will lose our history.

Among all the designs the most famous one is the Temple Jewellery Design. 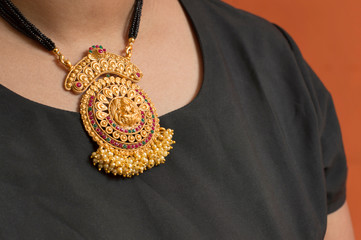 Temple Jewellery Design is mostly famous in the southern part of India. This design is mostly worn by the Bharatanatyam dancers. It reflects the temples, Gods and Goddesses like Laxmi, Ganesh, Vishnu and many others. Also, it employs the traditional motifs of peacock, lotus, parrots and fishes. Embedded with north Indian stones like emerald and ruby symbolises south India. Also, many other precious stones are used too like Kundan, meenakari, pearls, diamonds and a lot more. Now-a-days, they are available in different elements also like silver, copper, bronze, etc. which are much lighter in weight than the traditional ones whose base is gold.

Apart from this, the other designs available are:

Kundan is one of the traditional gemstones used for making jewellery (1). These stones are set with gold threads or foils, to keep them intact and for into a necklace.

Polki is a practically uncut diamond that is intrinsically dug from the soil without any enhancement and lab invention.

It was first introduced after the advent of the Mughals. Apart from the famous monuments and architectural style, what Mughals bought in India was jewellery made of polki. All the Mughal emperors, starting from Babur to Bahadur Shah Zafar, all used to wear jewellery made of polki. Their begums also adorned themselves with these polki. Polki was then referred to as the symbol of royalty.

Not only Mughals, the royalty of Gujarat and Rajasthan also used these polki as their ornament.

Being the diamond in its pure form, polki is very expensive and is often passed on as heirlooms Dazzling and beautiful, the meenakari work of Rajasthan has greatly influenced the bridal jewellery collection of India. It can be said that meenakari is the heritage of Rajasthan.

Now-a-days, it is gaining more popularity among celebrities and upper class people. From weddings to casual high-class parties, this jewellery can be paired with every dress style. If you know the right way of styling, it can give you an elegant yet classy indo-western look.

This art soon became very popular among the jewellers of India. Now it is produced in every part of India with great demand.

Also Read: 4 TYPES OF NECKLACES YOU CAN MAKE THROUGH JEWELLERY DESIGNING Navaratan is a Sanskrit term for “nine gems” and navaratna jewellery includes these nine different gems in its setting. The combination of these is said to be not only powerful but auspicious not only in Hinduism but also in Jainism and Buddhism.

Apart from these, a lot of New Jewellery Designs are popular among buyers. But most of them are generally inspired by the old antique designs. A new mind creates new ideas that are worth appreciating. The new designs mostly comprise diamonds and solitaires which gives you an elegant and chic look. If you want to learn more about jewellery designing, join Hamstech and learn from experts. Enrol now!