When students from a creative background decide to unite for a sporting event, the result is a colourful display of vigour. While the sun beamed and the ground sparkled with a glimmer of energy, laughter and cheer echoed across every corner.

Hamstech has been in the field of creative education for the past 25 years and has done various fashion shows and exhibitions, promoting their students’ work on a national platform. However, Sports Mania, Hamstech’s first-ever premier sports tournament held on the 7th of March, 2017 was designed to encourage students to build team spirit and learn how to work in groups.

On the crack of dawn, Hamstech’s students and faculty began the preparation of the day. Slowly students started to gather outside their Panjagutta campus and began to board the buses routed directly to Shankarpally village. With enthusiasm and curiosity, they reached their destination.

The event began with the National Anthem and later kicked off with various games such as Kabbadi, Badminton, Football, Kho Kho, Cricket, Tug-of-war, Tennis and Throw Ball. Every corner of the ground was filled with students sporting a white t-shirt with a patch of Hamstech’s logo, adding a dash of colour to their attire.

Students began practicing and warming-up quite early to vitalise their body before the actual commencement of the games. There was a blast of music, fresh dose of refreshments and a cafeteria serving snacks to keep our students recharged throughout.

Games like Kabaddi, Badminton, Football and Kho Kho began simultaneously in different sections of the ground, monitored by the members of the faculty and cheered by the non-participants. A lunch break in between gave the participants an extra boost to strive and succeed.

Right after the break, Throw ball and Tug-of-war began with a bang! The game reserved for the last was Cricket. While March’s sunshine burnt their backs, one could spot the students sweating and yet never stopping. 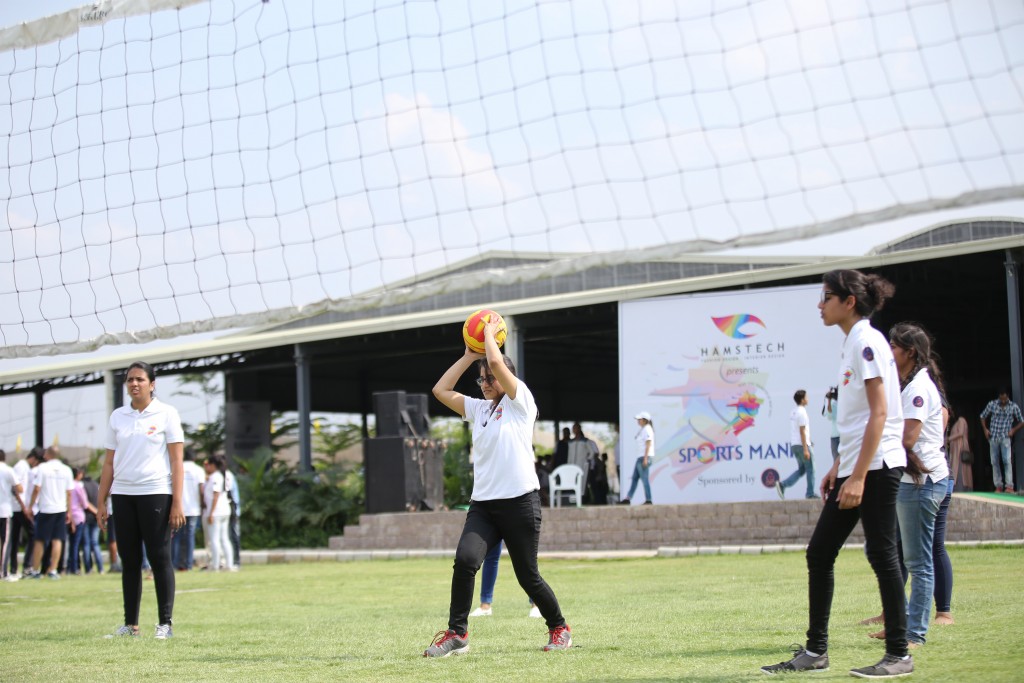 And finally it was time to announce the winners. Participants and winners of every game were called up on stage and felicitated with a medal and a trophy by the guest of honour, Mr. Venkatapathy Raju and the Managing Director of Hamstech, Mrs. Ajitha Reddy.

Mr. Raju, who is also popularly known for his achievements in the field of Cricket, shared a few words of encouragement with the students.

The crowd cheered the winners on and slowly started to disperse. But what everyone believed to be the end, only gave rise to another game. And thus began, a whole new tug-of-war began between the faculty members and the employees of the organization. It ended with even more cheering, fun, frolic and high spirits that knew no end.

By now the sun had set and the atmosphere was filled with joy as the students dance, sing and move to the rhythm of music. The best part, however, was when a group of photography students impulsively went up on the stage and started dancing in to an old Bollywood number and immediately caught the attention of the crowd!!!

There on, a series of pictures were clicked and uploaded on social media. Meanwhile the Digital Marketing and the Content Development teams worked simultaneously to keep their official page updated, to make this event a talk-of-the-town.

While Hamstech has been associated with a number of shows and exhibitions since decades now, this event definitely came as a surprise to the students as well as the faculty. But what was moving, was the overwhelming response. Students loved the idea and soon enough registration for every sport was filled with the names of enthusiastic players.

What only began as a suggestion went on to become a grand success!

Sports Mania 2017 saw students of a creative organization come together and work as a team that united and strengthened them to achieve success.

Vince Lombardi once said, “Winning is not everything, but making an effort to win is”.

We hope each of our students took back this message and understood that life, just like sports, involves competition, games, rules, loss and victory.

So play fair, play honest, and most importantly play YOU!